Bypass Censorship find and promote tools that provide Internet access to everyone.

The site is built by: 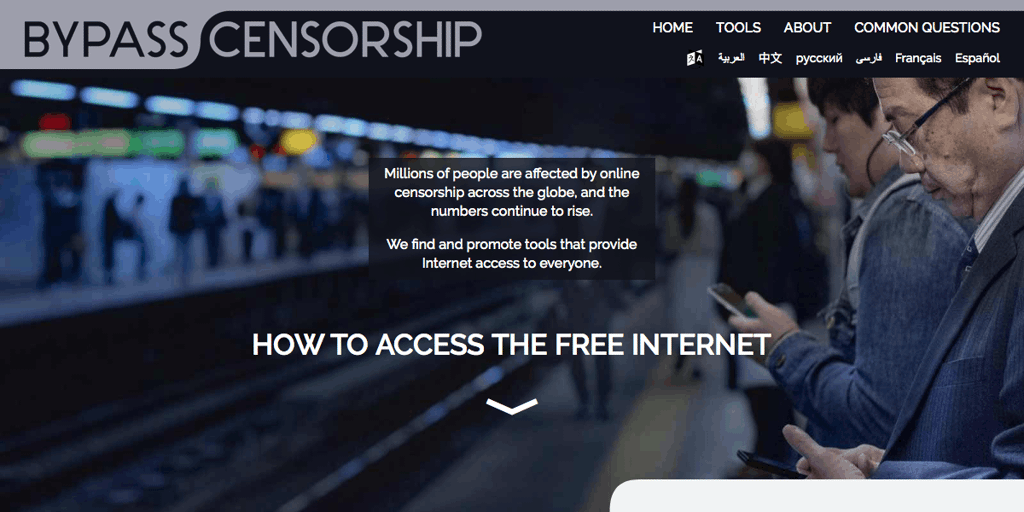 Websites of international news agencies are often blocked in many countries. In order to connect people to these sites, Bypass Censorship feature and recommend tools in the following languages: English, French, Spanish, Arabic, Farsi, Chinese, and Russian.

One of the tools is the Bypass Censorship Extension for Firefox and Chrome. The extension help direct people to mirrors of partners sites if they are being censored.

The first version of the site was built in Drupal 8 but it was relaunched as a static site built with Hugo in 2019.

Security, page load time and easy of hosting is the main reasons for switching to a static site. As the lead developer I had good experience with Hugo and was interested in exploring the multilingual features.

It’s a simply site, basically one page in seven languages. I had no problems getting Hugo to output what I wanted. Found the multilingual support straight forward and easy to work with.

Thanks to the design by Leyla Avsar the site also looks good. I used the Hugo Zen theme with a few custom templates and the needed CSS.

The editors can maintain content via Forestry.io CMS or directly via Git. Forestry does unfortunately not have multilingual support. All the language versions are in one pile making it harder to find the right file to edit, but it works.

Last Update: October 21, 2019
Improve this page
The Showcase articles are copyright the content authors. Any open source license will be attached.