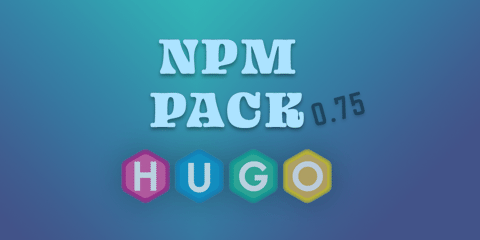 Hugo 0.75.0 brings several improvements to Hugo Modules, a new CLI command to bridge the JavaScript dependencies into Hugo, a refresh of the versions of the most important upstream dependencies, and more. There are also some good bug fixes in this release. One notable one is covered by this commit – which covers a “stale content scenario in server” when you include content or page data via GetPage from a shortcode.

The new CLI command is called hugo mod npm pack. We have marked it as experimental. It works great, go ahead and use it, but we need to test this out in real projects to get a feel of it; it is likely that it will change/improve in the upcoming versions of Hugo. The command creates a consolidated package.json from the project and all of its theme components. On version conflicts, the version closest to the project is selected. We may revise that strategy in the future (minimal version selection maybe?), but this should give both control and the least amount of surprise for the site owner.

So, why did we do this? JavaScript is often a background actor in a Hugo project, and it doesn’t make sense to publish it to a NPM registry. The JS dependencies are mostly build tools (PostCSS, TailwindCSS, Babel), devDependencies. This has been working fine as long as you kept the JS config files (including package.json) in the project, adding duplication/work when using ready-to-use theme components. These tools work best when you have everything below a single file tree, which is very much different to how Hugo Modules work. An example of a module with TailwindCSS:

If you included tailwind-module in a Hugo project and processed it with PostCSS, this is what happened in earlier versions:

The above just doesn’t work and here is the technical notes on how we have fixed this:

This release represents 79 contributions by 19 contributors to the main Hugo code base. @bep leads the Hugo development with a significant amount of contributions, but also a big shoutout to @dependabot[bot], @moorereason, and @jmooring for their ongoing contributions. And a big thanks to @digitalcraftsman for his relentless work on keeping the themes site in pristine condition and to @davidsneighbour, @coliff and @kaushalmodi for all the great work on the documentation site.

Many have also been busy writing and fixing the documentation in hugoDocs, which has received 24 contributions by 15 contributors. A special thanks to @jmooring, @bep, @jornane, and @inwardmovement for their work on the documentation site.