This release adds powerful module support with dependency management for all component types, including content. And we now have built-in deployment support to GCS, S3, or Azure. 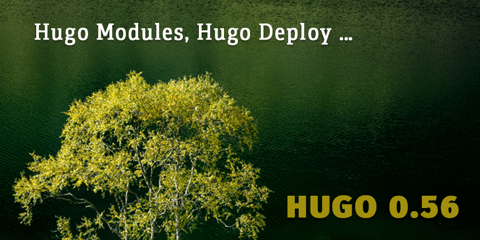 Hugo 0.56.0 is filled with improvements, but there are two main headliners: Hugo Modules and Hugo Deploy.

Hugo Modules is very much a community effort on the design and specification side, but @bep has driven the implementation. Some notes about what all of this is about:

This is all very much brand new and there are only a few example projects around:

This release represents 104 contributions by 19 contributors to the main Hugo code base. @bep leads the Hugo development with a significant amount of contributions, but also a big shoutout to @vangent, @niklasfasching, and @coliff for their ongoing contributions. And a big thanks to @digitalcraftsman and @onedrawingperday for their relentless work on keeping the themes site in pristine condition and to @kaushalmodi for his great work on the documentation site.

Many have also been busy writing and fixing the documentation in hugoDocs, which has received 48 contributions by 37 contributors. A special thanks to @davidsneighbour, @bep, @BCNelson, and @coliff for their work on the documentation site.