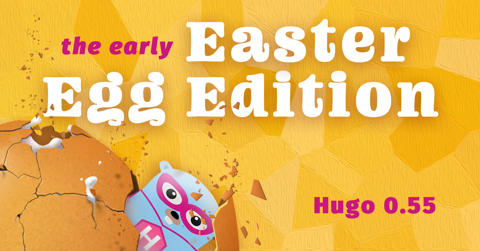 Hugo 0.55 is the early Easter Egg Edition with lots of great improvements and fixes. The original motivation for this release was to prepare for Issue #5074, but the structural changes needed for that paved the way for lots of others. Please study the list of changes below, and especially the Notes section, but some headlines include:

Custom Output Formats has been a really useful feature, but it has had some annoying and not so obvious restrictions that are now lifted. Now all Page collections are aware of the output format being rendered. This means, to give some examples, that:

We have now also added a new Permalinkable configuration attribute, which is enabled by default for HTML and AMP.

Shortcodes using the {{% %}} as the outer-most delimiter will now be fully rendered when sent to the content renderer (e.g. Blackfriday for Markdown), meaning they can be part of the generated table of contents, footnotes, etc.

If you want the old behavior, you can put the following line in the start of your shortcode template:

But using the {{< >}} delimiter will, in most cases, be a better alternative, possibly in combination with the markdownify template func.

Hugo’s partial and partialCached are great for template macros. With the new return keyword you can write partials as proper functions that can return any type:

The taxonomy nodes now have a .Page accessor which makes it much simpler to get a proper .Title etc. This means that older and clumsy constructs can be simplified. Some examples:

This version is also the fastest to date. A site building benchmark shows more than 10% decrease in both build time and memory consumption, but that depends on the site. It’s quite a challenge to consistently add significant new functionality and simultaneously improve performance. Also, note that we are now more honest about build times reported (Total in 1234 ms). We now do all initialization in the Build step, so you may get a higher time reported if you, as an example, have --enableGitInfo enabled, which now is included in the reported time. 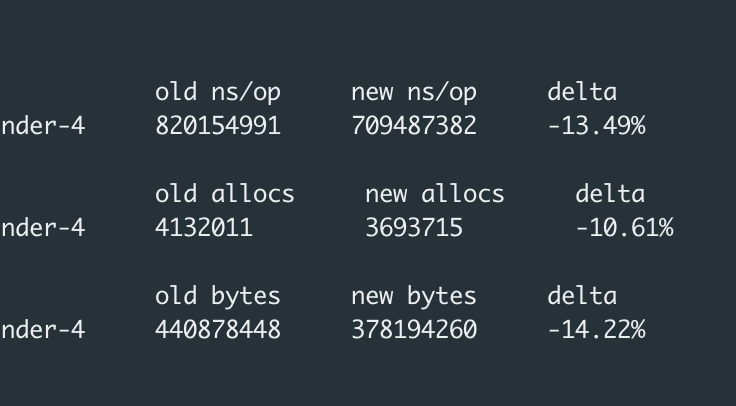 This release represents 59 contributions by 10 contributors to the main Hugo code base. @bep leads the Hugo development with a significant amount of contributions, but also a big shoutout to @mcdee, @quasilyte, and @danielcompton for their ongoing contributions. And a big thanks to @digitalcraftsman and @onedrawingperday for their relentless work on keeping the themes site in pristine condition and to @kaushalmodi for his great work on the documentation site.

Many have also been busy writing and fixing the documentation in hugoDocs, which has received 36 contributions by 21 contributors. A special thanks to @bep, @peaceiris, @budparr, and @tinymachine for their work on the documentation site.

As this release has required a significant effort with manual testing, a special thanks go to @onedrawingperday (the 300 theme demo sites have been invaluable to check for API-breakage!), @adiabatic, and @divinerites.