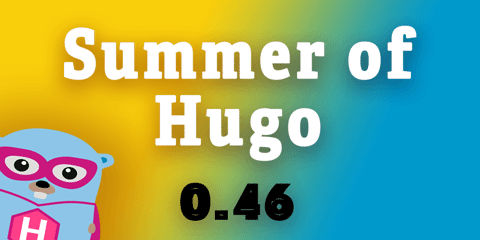 Hugo 0.46 is the closing credits to The Summer of Hugo. While most people have been relaxing on the beach, Hugo has been really busy:

This was followed by some more technical follow-up releases. And today, when July has turned into August, we come with another one. It’s not a big release. But with the big interest in Hugo Pipes, we felt that it was important to get this out there sooner rather than later.

There are two main items in this release:

This release represents 12 contributions by 2 contributors to the main Hugo code base.

A special thanks in this release goes to @onedrawingperday for his excellent work maintaining the fast-growing Themes Site.

Many have also been busy writing and fixing the documentation in hugoDocs, which has received 5 contributions by 3 contributors.