A sequel to the very popular Hugo Pipes Edition; bug-fixes and enhancements … 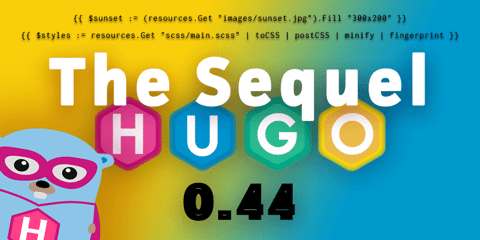 Hugo 0.44 is the follow-up release, or The Sequel, of the very well received 0.43 only days ago. That release added Hugo Pipes, with SCSS/SASS support, assets bundling and minification, ad-hoc image processing and much more.

This is mostly a bug-fix release, but it also includes several important improvements.

Many complained that their SVG images vanished when browsed from the hugo server. With Hugo Pipes MIME types suddenly got really important, but Hugo’s use of Suffix was ambiguous. This became visible when we redefined the image/svg+xml to work with Hugo Pipes. We have now added a Suffixes field on the MIME type definition in Hugo, which is a list of one or more filename suffixes the MIME type is identified with. If you need to add a custom MIME type definition, this means that you also need to specify the full MIME type as the key, e.g. image/svg+xml.