Hugo 0.43 adds a powerful and simple to use assets pipeline with SASS/SCSS and much, much more … 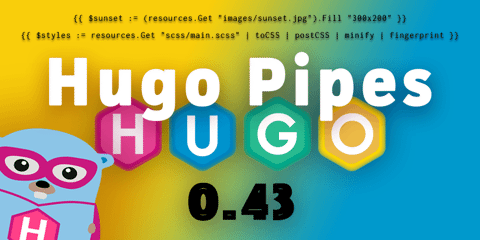 Hugo 0.43 adds a powerful and very simple to use Assets Pipeline with SASS and SCSS with source map support, PostCSS and minification and fingerprinting and Subresource Integrity and … much more. Oh, did we mention that you can now do ad-hoc image processing and execute text resources as Go templates?

To me, the above is beautiful in its speed and simplicity. It could be printed on a t-shirt. I wrote in the Hugo Birthday Post some days ago about the value of a single binary with native and fast implementations. I should have added simplicity as a keyword. There seem to be a misconception that all of this needs to be hard and painful.

I, @bep, implemented this in dea71670. We will work hard to get the documentation up to date, but follow the links above for details, and also see this demo project.

This release represents 35 contributions by 7 contributors to the main Hugo code base. @bep leads the Hugo development with a significant amount of contributions, but also a big shoutout to @anthonyfok, @openscript, and @caarlos0 for their ongoing contributions. And a big thanks to @digitalcraftsman for his relentless work on keeping the themes site in pristine condition and to @kaushalmodi for his great work on the documentation site.

Many have also been busy writing and fixing the documentation in hugoDocs, which has received 11 contributions by 5 contributors. A special thanks to @bep, @danrl, @regisphilibert, and @digitalcraftsman for their work on the documentation site.