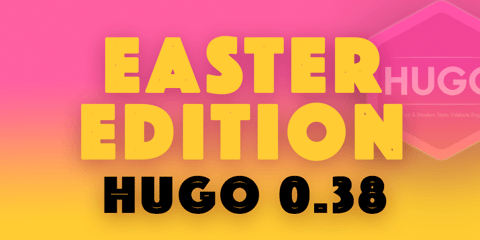 Hugo 0.38 is an Easter egg filled with good stuff. We now support fetching date and slug from the content filename, making the move from Jekyll even easier. And you can now set contentDir per language with intelligent merging, and themes can now provide configuration … Also worth mentioning is several improvements in the Chroma highlighter, most notable support for Go templates.

We are working hard to get the documentation up-to-date with the new features, but you can also see them in action with the full source at hugotest.bep.is.

This release represents 39 contributions by 4 contributors to the main Hugo code base. @bep leads the Hugo development with a significant amount of contributions, but also a big shoutout to @anthonyfok, @felicianotech, and @paulcmal for their ongoing contributions.

And a big thanks to @digitalcraftsman for his relentless work on keeping the themes site in pristine condition and to @kaushalmodi for his great work on the documentation site.

Also, a shoutout to @regisphilibert for his work on the new Code Toggle Shortcode on the Hugo docs site, which we will put to good use to improve all the configuration samples.

Many have also been busy writing and fixing the documentation in hugoDocs, which has received 55 contributions by 18 contributors. A special thanks to @kaushalmodi, @bep, @xa0082249956, and @paulcmal for their work on the documentation site.