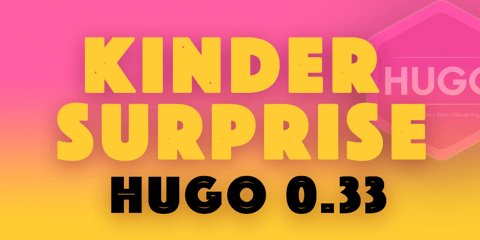 This is a full makeover of the layout selection logic with full custom layout and type support (many have asked for this). Also, Hugo now respects the url value in front matter for all page types, including sections. Also, you can now configure uglyURLs per section.

But this release is also a follow-up to the 0.32 release which was all about bundles with resources and powerful image processing. With this release it is now simple to add metadata to your images and other bundle resources.

@bep has added a section with examples of both resources configuration in both YAML and TOML front matter in his test site. The example below shows a sample of how it would look like in YAML:

This release represents 41 contributions by 3 contributors to the main Hugo code base.